Below you'll find everything you need to know about the band, band members experience & bookings.

There's also multimedia examples, images, graphics, audio & suggested logos for the band. Feel free to use any of these items for social media, web and print promotional materials your venue typically creates.

To book The Shakers or to get more information please contact David Alves, Band Founder/Manager at: 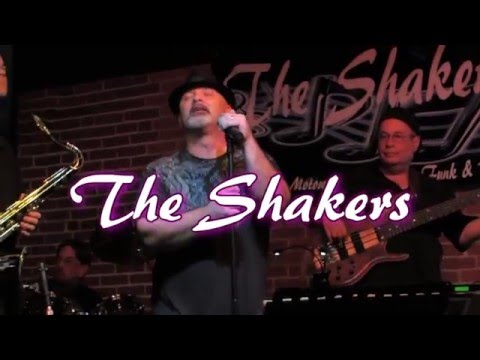 The Shakers were formed in January of 2011 by David Alves & Jerry Sullivan, with the intent of being one of the best "live performance" cover bands in New England. Founded on the roots of "Classic" genres such as Motown, R & B, Rock, Soul, Funk & Blues, The Shakers bring the music to life with jaw dropping performances that have left their audiences in a frenzy, and screaming for another encore.

There have been many challenges along this musical journey, with many different versions of the band, which has all brought us to this latest and greatest ensemble of super talented, yet humble musicians that always put the music first. The Shakers are a musical family of brothers, who along with strong convictions, and a dedication to not only their individual crafts, but also, to every venue & audience, by delivering heart pounding, feet stomping performances that will leave them breathless, and loving every minute of it.

Click below to view our song list & a list of the venues we have played. Feel free to contact them and ask about our shows and professionalism. Every venue we play asks to have us back.

The Shakers Photos:
(Right click any thumbnail and do a "Save Link As/Save Target" to save an image)

David Alves - Lead & Backing Vocals - Born into a family of incredibly talented performers, David was exposed to the wonders of music and singing at the ripe old age of 3. Singing, dancing and performing were things that just came naturally to David, as his mentor and father John was a very successful artist, touring throughout the 1950's. He delivered silky-smooth vocals, which he in turn passed along to David, who quickly became obsessed with the wonderful harmonies of the 50's, the great break out music of the 60's and the unforgettable sounds of the 1970's. The Beatles, Frank Sinatra, The Temptations and Bad Company are but a few eclectic favorites.

Embarking on a very successful, 35-plus year musical journey, David has been delighting audiences across New England and particularly Massachusetts, where he spent seventeen years performing in some of Boston's legendary venues such as Bunratty's, Jack's, The Channel, The Paradise, Club III & many more. David has shared the stage with the likes of Bonnie Rait, Amee Mann, Tracy Chapman and others, and is going stronger than ever, as he brings his latest musical venture, The Shakers, to a stage near you!

Creating the idea and "brand" for The Shakers was a dream, and required countless hours of searching, recruiting and auditioning the best possible musicians, and people to bring his vision to life. It's all about the music, because music can change people, and people can change the world. The Shaker's one and only goal is to respect the music and the artists that brought it to light, while delivering to its audiences, an epic musical/visual & vocal extravaganza................

Jerry Sullivan - Keyboards, Lead & Backing Vocals - A native New Yorker, Jerry grew up in a musical family, and from an early age was exposed to music of all styles, from Classical and Opera, to Rock, Soul and Jazz. Influenced by his mother's involvement in local church choirs and community choruses, Jerry developed an ear for harmony, and a talent for arrangement. After absorbing the music of Billy Joel and Chicago, Jerry became determined to begin his journey as a professional musician, and by the age of 9, had begun his studies in piano and trumpet. He continued to study music formally in college, and for over two decades, has been honing his craft on stages all over the Northeast.

Jerry was influenced early on by the great artists of the 70\'s and 80\'s, intrigued by bands such as Rush, Genesis and Steely Dan, as well as artists like Paul McCartney, Stevie Wonder and Hall and Oates. Jerry loved how these artists fused styles such as reggae, jazz, classical and funk into their own sound. In his teen years, Jerry further developed his musical style with the influence of artists such as Level 42, Tears for Fears, Howard Jones and Michael Jackson. Being open-minded to all styles of music has contributed to Jerry's development into an accomplished performer.

As a founding member of The Shakers, Jerry is thrilled to finally be with a brotherhood of musicians, with a shared passion and devotion for the finest songs from the golden era of popular music. Jerry brings to The Shakers the culmination of over 35 years of musical study, appreciation and dedication, where he can perform the music he loves for audiences whose love and respect for the music equals his own.

Are you a Sax Player? - - Sax, Percussion, Vocals - We are currently looking for a fill in (to possible permanent) sax player for the Shakers. Contact us using the booking information above if you would be interested in playing with a professional, hard working band that has a great set list and is pretty much booked solid!

Dave Alex - - Guitar - From an early age, Dave was exposed to a wide variety of classic music. He first picked up the guitar while in his early teens, and hasn't put it down since! A self-taught musician, Dave has been developing his skills in performance, collaboration, production and composition of a wide array of musical genres, including everything from classic rock and heavy metal, to jazz, folk and blues.

For over 25 years, Dave has been performing throughout New England, sharing the stage with such notable acts as Kid Rock, Godsmack, Candlebox and Powerman 5000. Dave is influenced by a wide variety of music, and musicians; the core group of artists having the largest impact on his guitar playing include innovators such as Jimi Hendrix, Jimmy Page and Eddie Van Halen; blues masters such as BB King, Eric Clapton and Stevie Ray Vaughn; and jazz greats including Pat Metheny.

Continually evolving, Dave is excited for the opportunity to share his skill-set with The Shakers, as he embarks on one of his greatest musical journeys to date!

Bob Cooper - Bass - Bob Began playing classical guitar at the age of 8 and continued lessons until age 13. He Played guitar until he discovered the bass at age 17, and there was no looking back. After playing in local bands in CT for a year he then moved to ME and played in rock and folk bands for the next 2 years. Then a friend asked him to come to Boston for the summer to play in a band. After the summer band ended Bob decided to stay in Boston. He joined a band that played in all the local Boston clubs and also toured the country. After 6+ years playing dance clubs all over the country Bob moved on to an original rock band called Savage Amusement. After years of work playing many concerts in the Boston area, they received local airplay on WCOZ & WBCN. Unfortunately due to personnel issues the band dissolved just as record companies were showing interest. From there Bob moved on to the Tracy Brothers show band for 3 years. For a short time he moved to Miami and played with a great band called the Dukes of Funk. Bob realized Miami was not for him and returned to the Boston music scene. After a few years playing in wedding bands Bob took a sabbatical from playing gigs to raise his young children. Bob has been back at it for the past 12 years. Upon his return to the music scene Bob first joined a club band called Burnt Toast which lasted for 3+ years. Bob was also one of the original founding members of the Pink Floyd tribute Gilmour\'s Breakfast and had a great 7 year ride with them. Looking to play a different, more funk oriented style Bob played with The Souled Out Show Band until they decided to break up. Now it's time to play some crazy fun music with The Shakers.

John Schneider - - Drums & Percussion - John began playing the drums at the age of 15, after first hearing the call of the British Invasion. Along with his brother on guitar, John formed his first band, and was soon performing hits by The Beatles, The Rolling Stones, and The Who, throughout his native upstate New York. From the late 1960\'s, through the 1980\'s, John performed with a number of diverse rock and brass bands, defining his solid playing style while covering songs by Chicago, Blood, Sweat and Tears, Three Dog Night and countless others.

During a career which has spanned over four decades, John has shared the stage with such noted luminaries as Kris Kristofferson and Rita Coolidge; hit-makers Eric Carmen and The Raspberries; singer Mary Clayton (of Rolling Stones fame), and the late Jim Henson.

As the final piece of The Shakers puzzle, John brings his passion for music, his desire to work with top-notch musicians in a tight, cohesive unit, and the ability to propel the band with his solid and dynamic style. John\'s goal is to keep The Shakers solidly grounded, even as he drives them to newer heights!